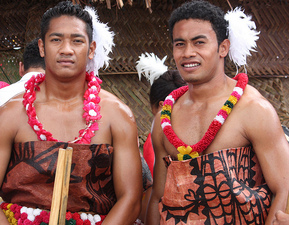 The Average Male
The male's role in the Tongan society is to be the provider. The Tongan society is a patriarchal society however men are not valued as much as women are. They work in labour and do the hard work. They build the huts and kill the food. John Wolf wrote, "Male duties are described as 'heavy, difficult, dirty, and requiring mobility.'" The men are the ones who are the masculine strong ones. They are regarded as being being viewed as, "lacking restraint and being inferior," Wolf argues. While this hole truth, men have their place in the society but are, truthfully, placed below women in rank and status.

As children, boys are handled roughly and are not given much love. Boys are allowed to run around freely and do as they please as a child. Fights and wrestling is seen as acceptable as the boy must learn to be rough and masculine. This shows how, as boys, they must learn to take care of themselves and learn to be rough and masculine as they must be as a man. When reaching the adolescence, the boys are not punished for their behaviour. If they are, it is only minor. Abstinence is a key practice in the society and culture.

The Male Father
The father is the head of the home. The father is shown great respect and given even greater responsibility. He must look after his family and provide for them. He is the one who makes the final decisions of anything relating to the family. He must protect his family and ensure their safety. He is responsible for every member. This makes the father somewhat forced into being strict and enforcing.

The Male Brother
In a Tongan family, the brother is, surprisingly, not as high up in the ranks. He does however has lots of responsibility. He must help the father with the labour work around the work. If he has another job, he is expected to give his money to the family. 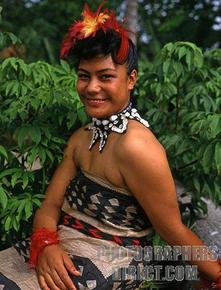 The Average Female
In the Tongan society, females are the people who are respected highly in the society. Women are seen as precious and virtuous. The roles of women are the task needed to be filled within the home, such as making clothes, cooking, cleaning etc. Wolf explains the roles and duties of a female as being, "light, easy, requiring lack of mobility," which is the opposite of what the male does. Women, in the Tongan culture, are symbolic of the 'chiefly' virtues, "stasis, resistant, sanctity, superiority, [and] dignity." (Morton) Adulthood is also closely related to chiefly duties which are perceived as feminine. Females usually are required or expected to have an escort with them at all times when leaving the house. This could be another man or women.

In childhood, girls are treated very softly and protected greatly. They are keep within the home for several years before they are allowed out. Even when they are let out, they are accompanied by a companion. When reaching teenage years, girls are punished greatly for inappropriate behaviour as they are to be seen as virtuous.

The Mother
The responsibilities of a mother to make sure the home is kept neat and tidy. The children are mainly disciplined by the mother, but the general care of them is sometimes left to the older sisters responsibility.

The Sister
Sisters are the most respected family member. They are often higher than the father. Sisters are responsible for taking care of the children. This is their main role in the home. They are also required to stay virtuous and clean thereby being an example to their younger siblings.